“The image of the classic manor dream reveals itself at the end of the linden tree avenue”. And Fiholm is, indeed, a true manor dream – a dream that continues inside the doors! 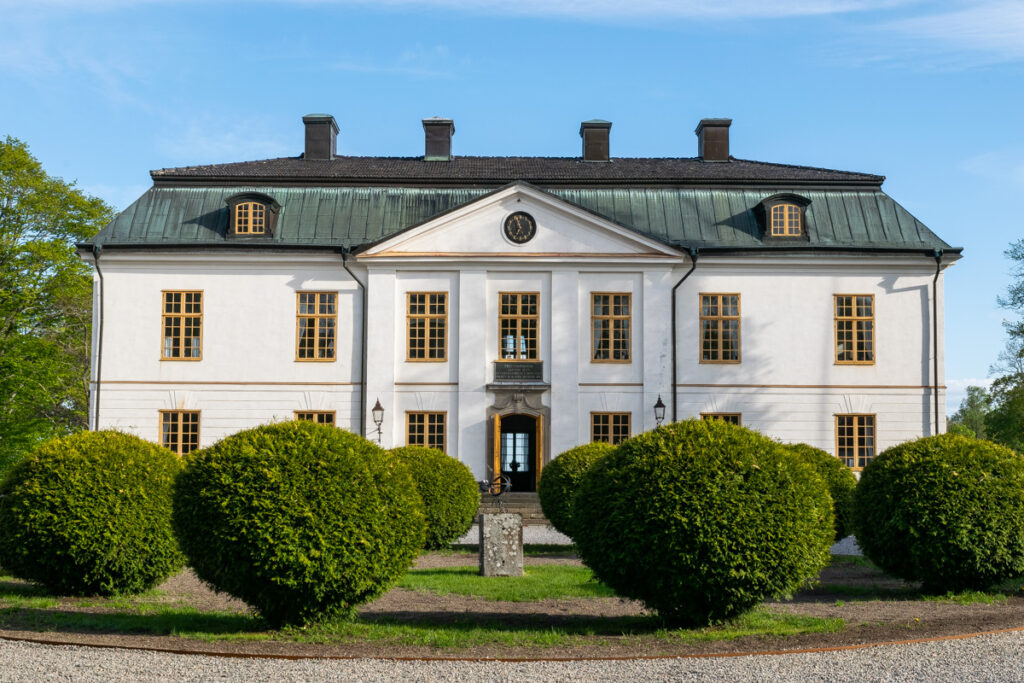 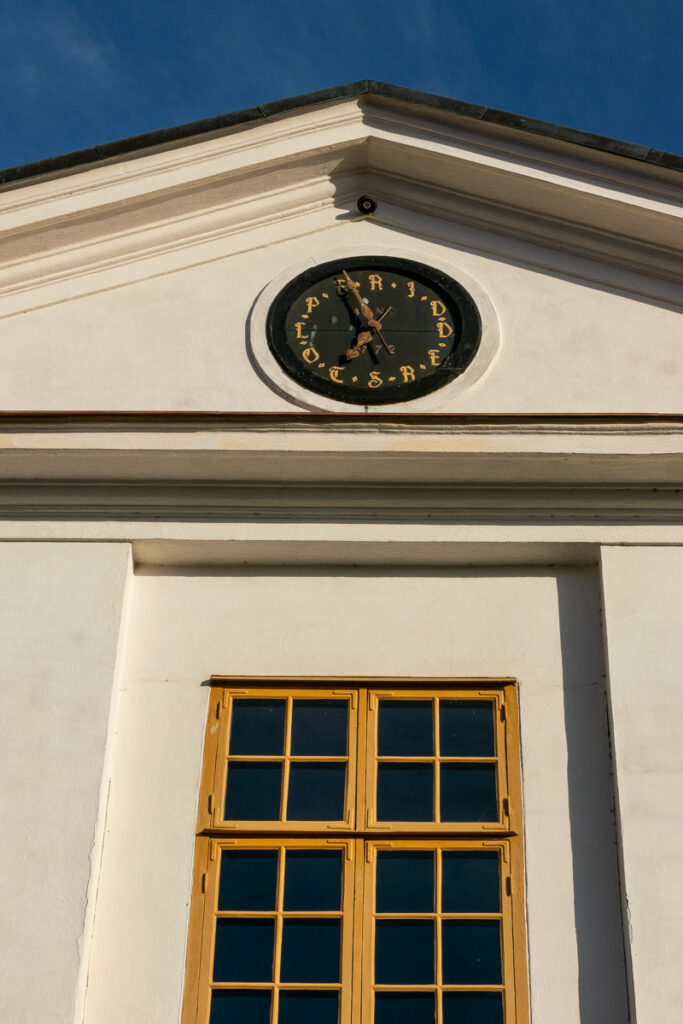 Fiholm has a clock on its frontispiece where the numbers have been changed to characters which reads – Ridderstolpe.

Fiholm is situated in Rytterne, the Provance of Västmanland, along the so-called Tidövägen and thus neighbouring both Tidö Castle and Wikhus Manor. The estate stems from the 1300s and was originally a manerium for bishops, but in the Great Reduction it became the property of the Crown. Since then, Fiholm has been the dowry of both Gustav II Adolf to Queen Maria Eleonora and Karl X Gustav to Queen Hedvig Eleonora. At the death of Hedvig Eleonora in 1715 it once again became the property of the Crown but was traded to the Wattrang family in 1720 for land elsewhere.

The estate has, since then, been passed down through the generations of family and to Privy Councillor Lord Carl Johan Ridderstolpe through marriage in 1748. Today, Fiholm is an entailed estate and is a listed company owned equally by relatives Gustaf Ridderstolpe and Hans Risberg. 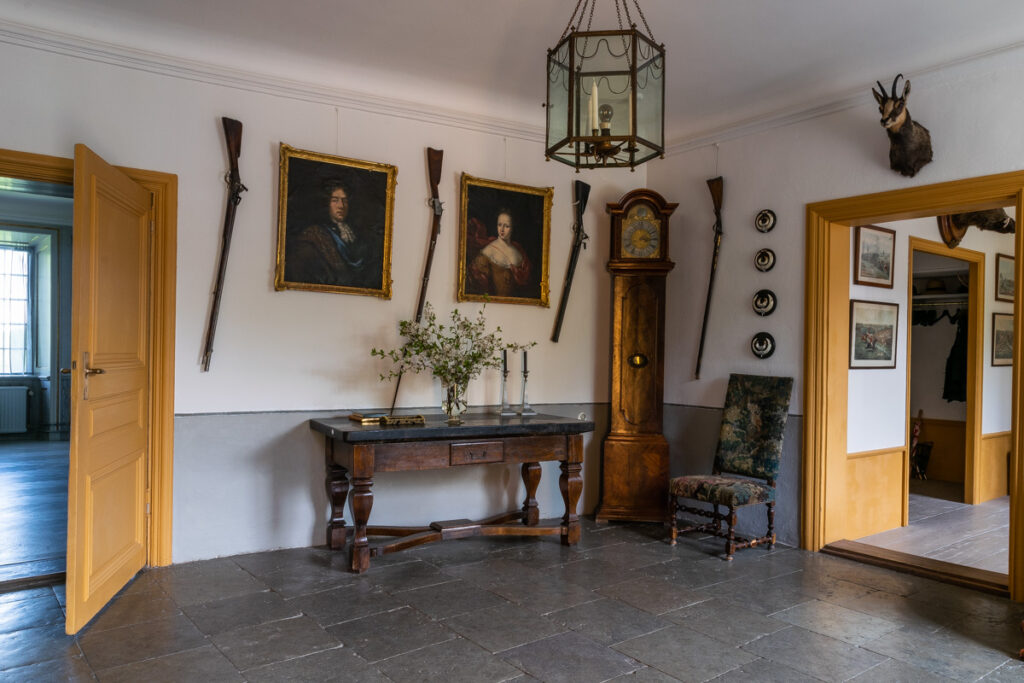 On the walls of the antechamber a unique collection of weapons greets us. A collection that has reached Fiholm in a number of different ways, not least via Admiral Carl von Frischen Ridderstolpe who in the early 1700s hunted pirates in the Mediterranean. Much of the interiors are connected to enthralling persons such as Marie-Antoinette and Axel von Fersen, and the stories about them are just as many as they are long.

To our great joy, Fiholm has been spared from major renovations schemes and is unusually well preserved. Interior designer Inger Risberg has invested a lot of energy into making the house modern and congenial, while at the same time preserving the historical heritage and unique interiors. 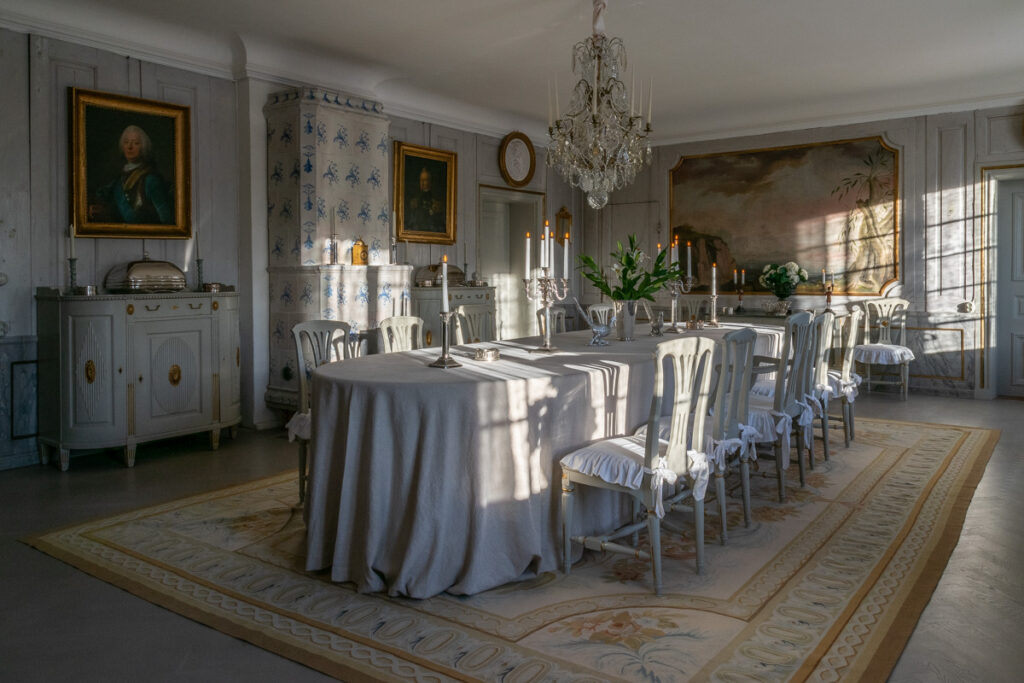 Fiholm’s beautiful dining room is guarded by wall paintings which are most likely older than the building itself. The dining room table and chairs are from Östervåla and were commissioned by Axel Ridderstolpe around 1910. 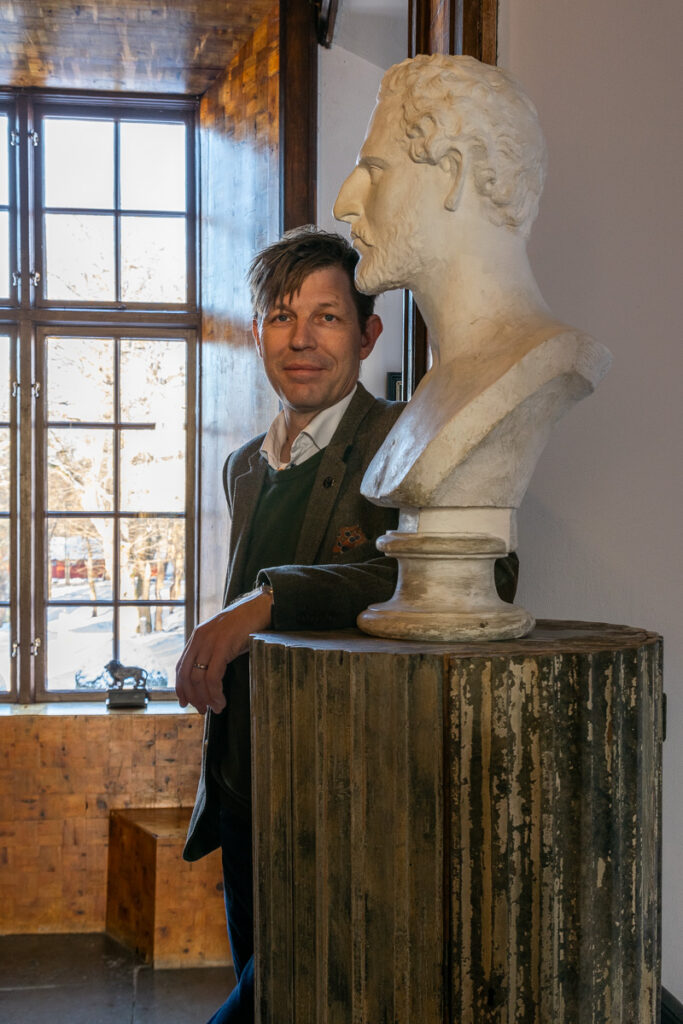 Gustaf Ridderstolpe in the upper antechamber, next to a bust portraying his paternal grandfather Carl Gustaf Ridderstolpe who, inspired by neighbouring Tidö Castle, had the room clad in small squares of juniper roots. He sits in front of a painting portraying Councillor of the Realm Axel Oxenstierna who points to his Letter of Recognition as Count that we can see lying next to Gustaf on the chest. In the upper right hand corner of the painting we can see an added window where Tidö’s present and previous main buildings can be seen. 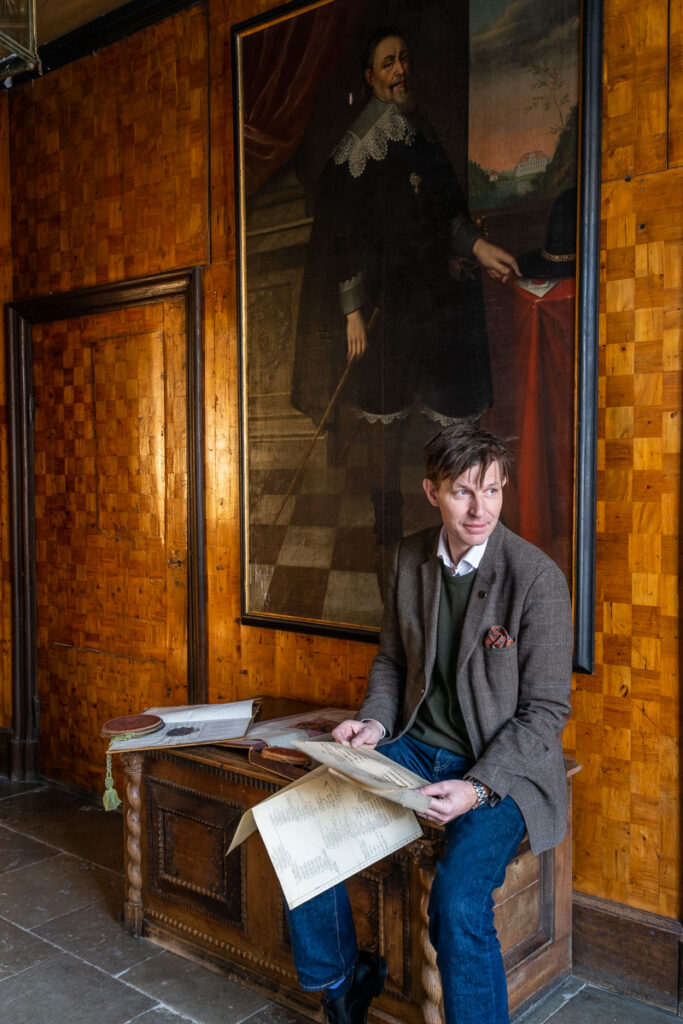 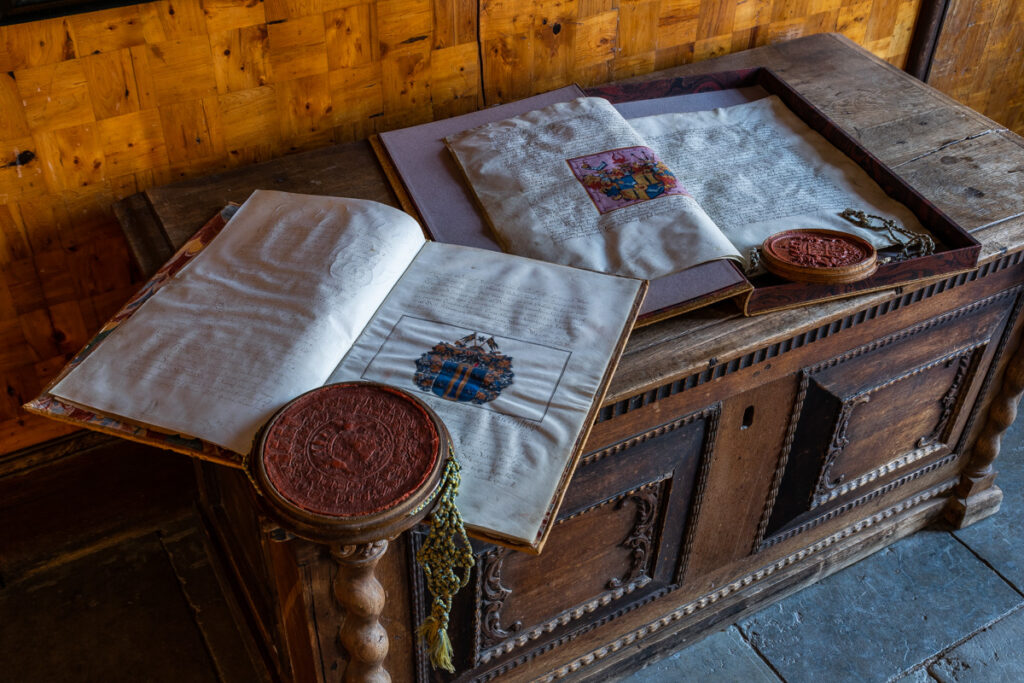 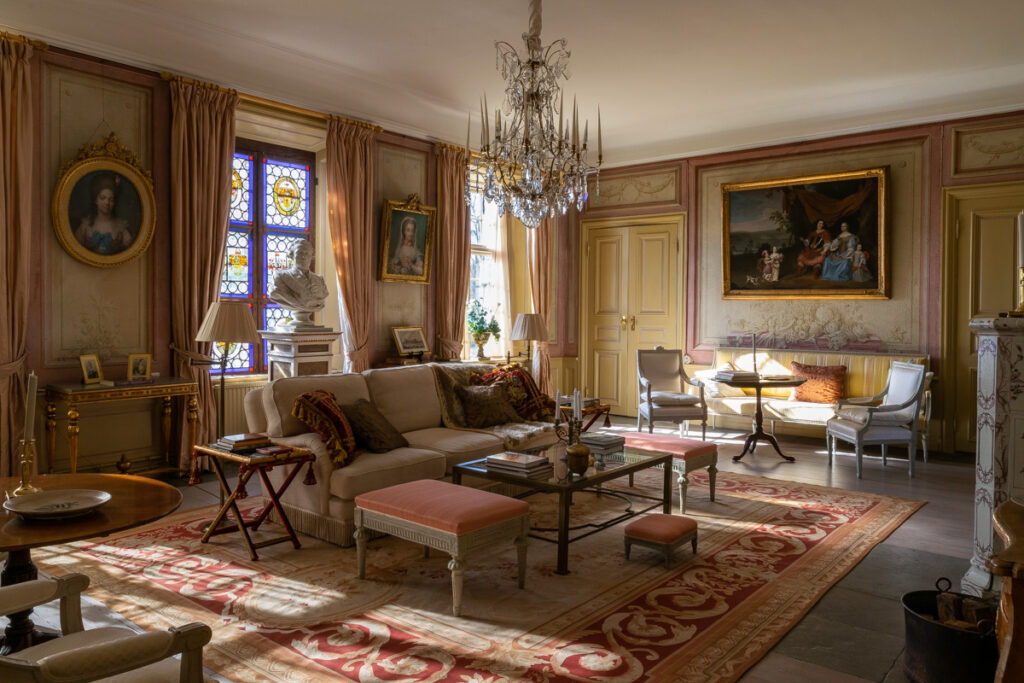 Wonderful colours in the Drawing room, which previously served as the Dining room. The Drawing room has original wallpaper, painted by Lars Bolander. 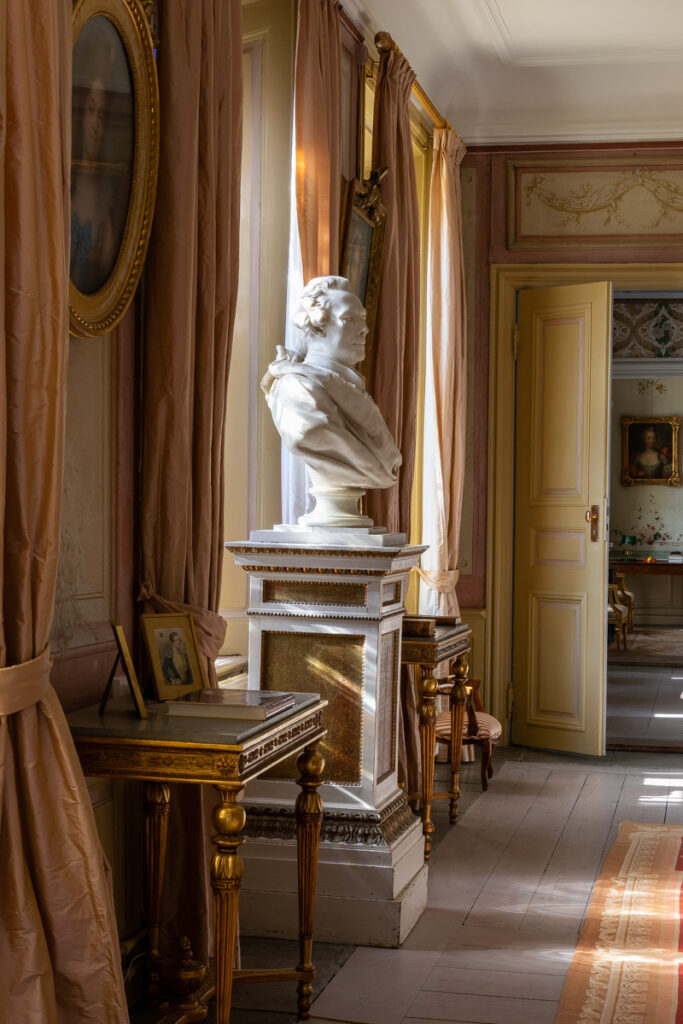 The marble bust is by Johan Tobias Sergel and portraits Fiholm’s builder Carl Johan Ridderstolpe, made after his passing. 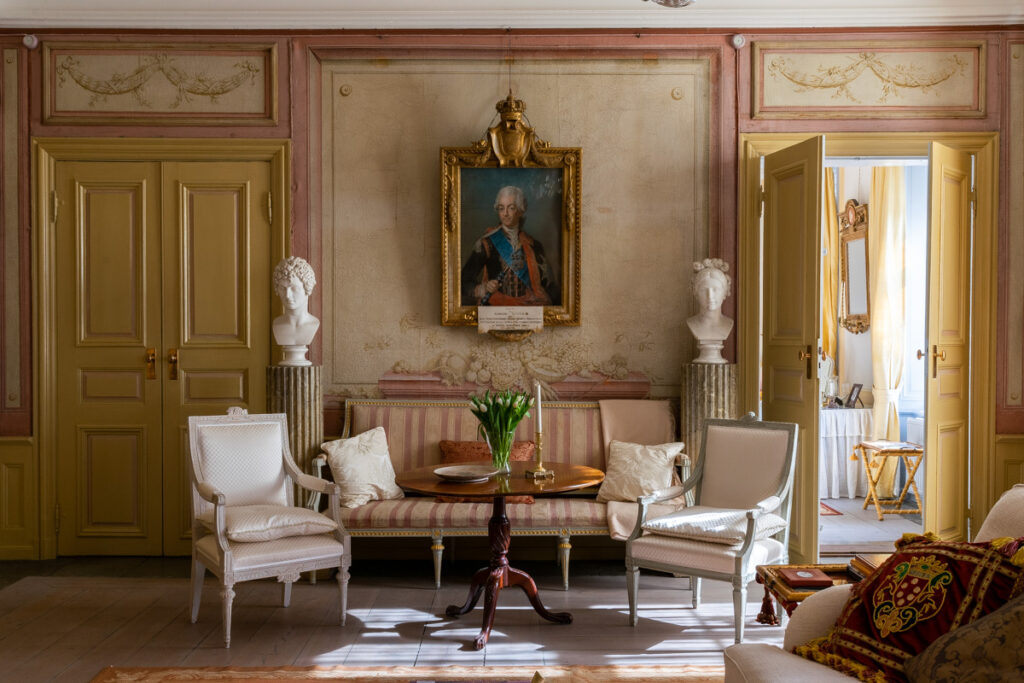 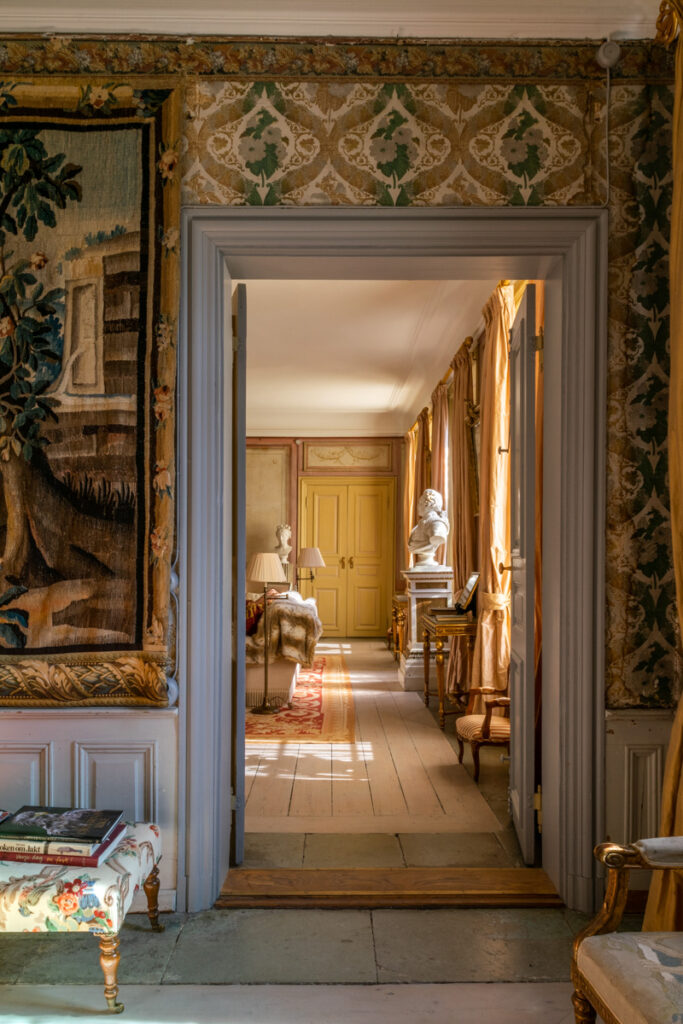 View of the drawing room from the “sewing room” which was originally the hostess’ bedroom, but today functions as a TV room. 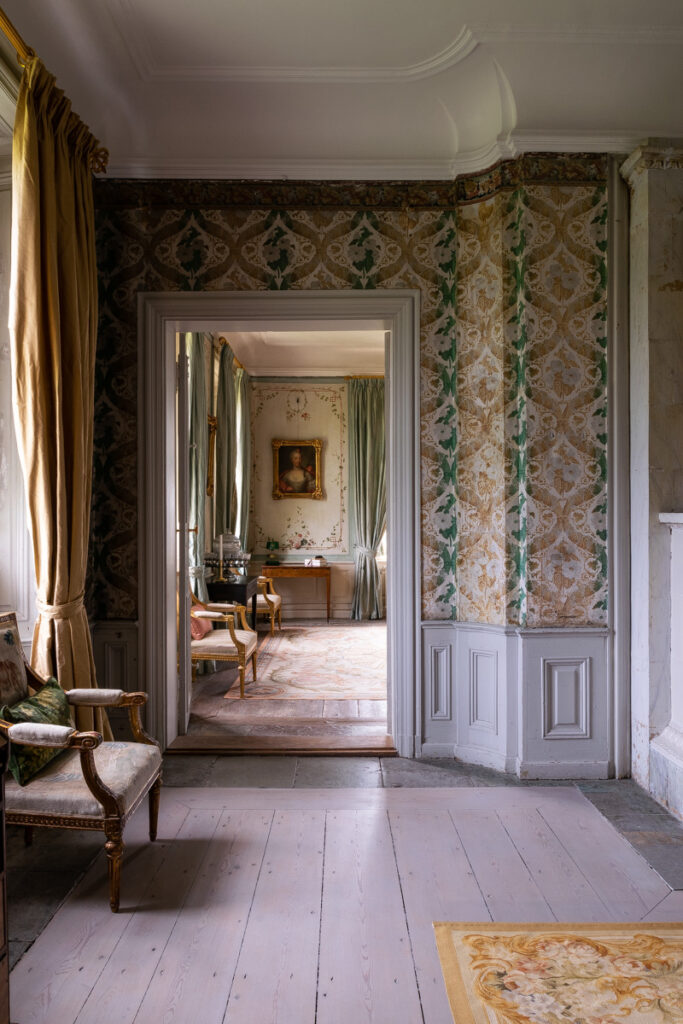 The so-called French Iris wallpaper in the “sewing room” is probably the oldest wallpaper on a wall in Sweden. 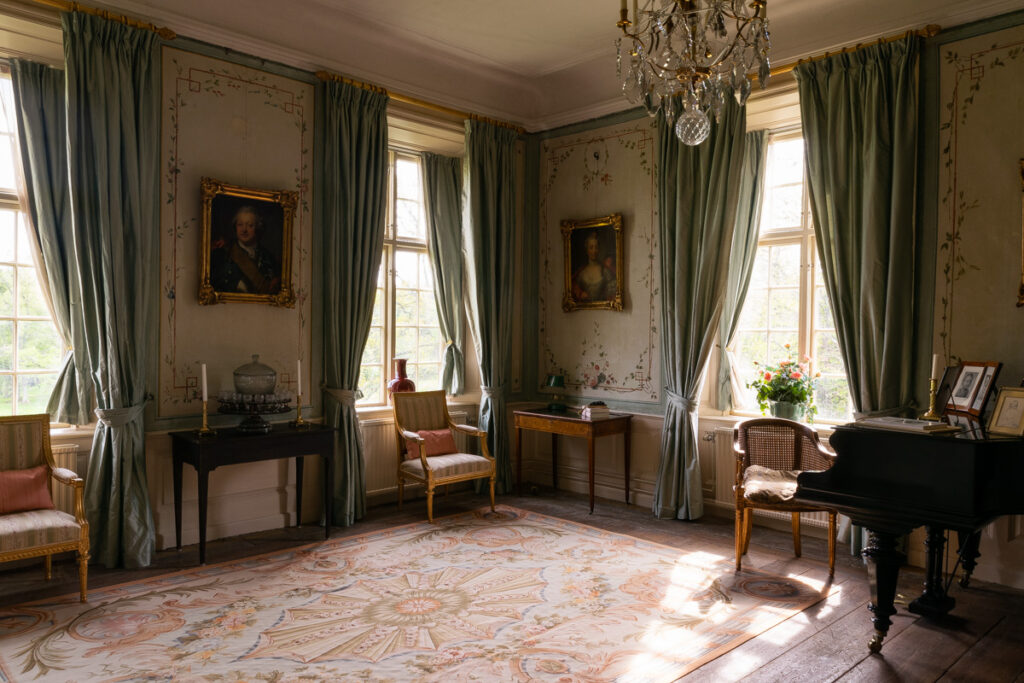 The Corner room has Asian-inspired wallpaper with bamboo, flowers and parrots, painted by Lars Bolander. The portraits show Wolter Reinhold Stackelberg and Ulrica Ridderstolpe. Below we see a portrait of Ulrica Ridderstolpe at seven years old and Eva Wattrang, the second family-owner of the estate. The bed is a rebuilt sofa, purchased by Inger Risberg. 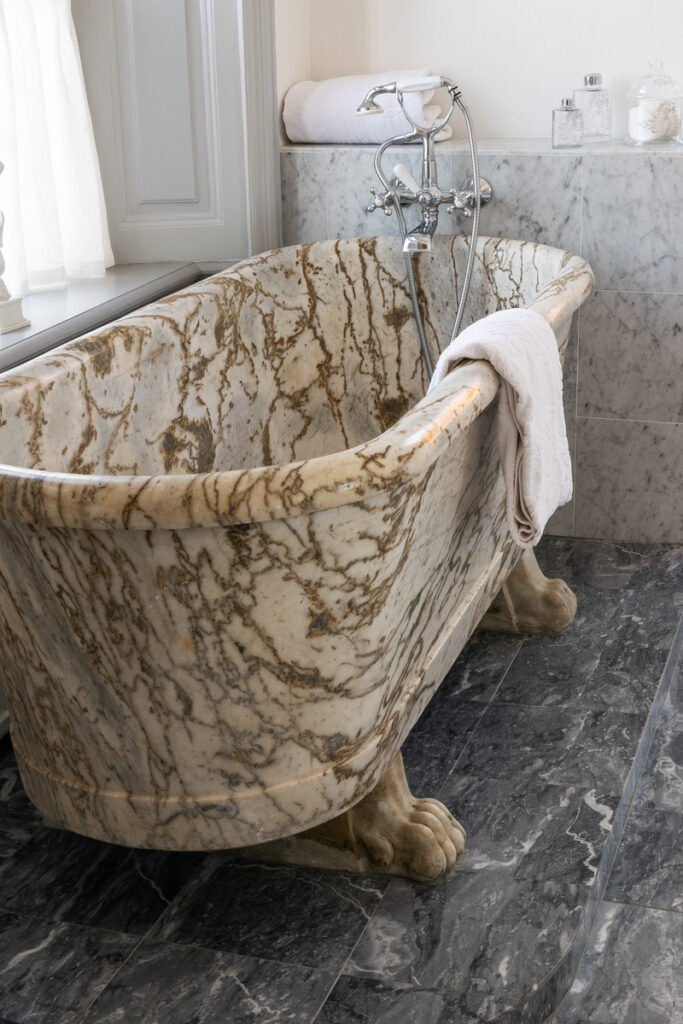 Something as unusual as a 3000 year old Etruscan sarcophagus in one of Fiholm’s bathrooms. The sarcophagus was brought to Paris by Napoleon and on to Sweden by Axel von Fersen. It then ended up at Fiholm through real estate deals in the late 19th century. Since 1950 it has been used as a bathtub. 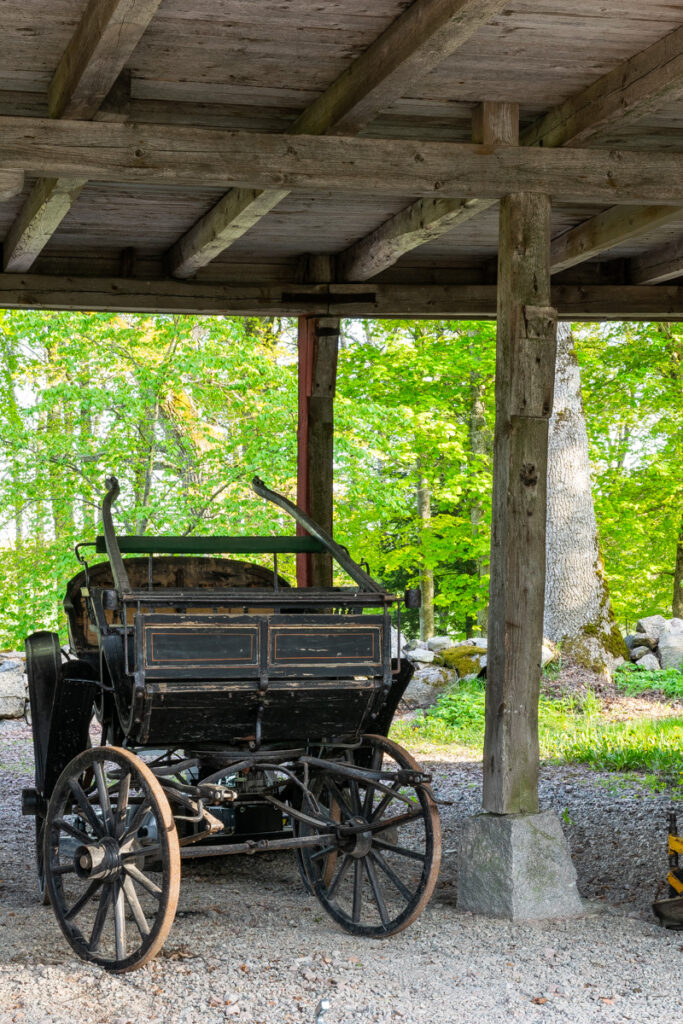 It is very popular to arrange weddings in Rytterne Church or in one of the church ruins just minutes away from Fiholm. This is often followed by a short horse carriage ride to Fiholm were couple and guests toasts in Champagne in the courtyard followed by a grand dinner and party in the orangery