Tidö Castle is one of Sweden’s best preserved, and by all means living, castles from the Age of Greatness. Axel Oxenstierna commissioned architects Simon de la Vallée and Nicodemus Tessin the Older to build him the grand castle between 1625-1641. Tidö was sold for the first time in 1840 and in the following half century it changed owners no less than six times before Carl-David von Schinkel acquired it in 1890. Since then, four generations of von Schinkel have called Tidö their home. 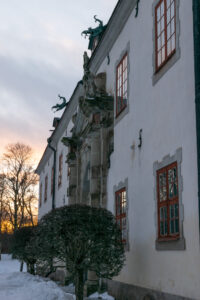 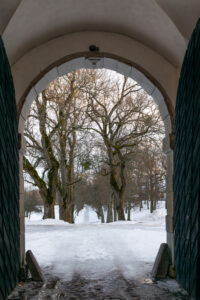 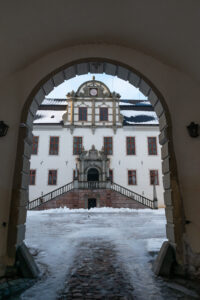 Digging deeper into the history of Tidö to write this text it was hard to limit the story to what can be included in just one article. Notice the dramatic downpipes on the roof. They are the only thing that remains from the old copper roof which was taken down in 1784 following Countess Dohna’s bad luck in games. 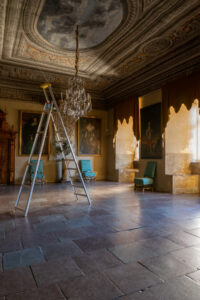 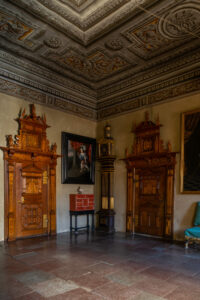 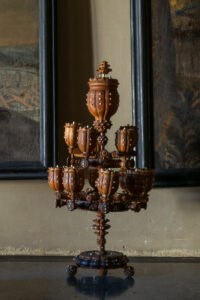 A proper ladder is needed when the crystal chandeliers are cleaned. Apart from the modern ladder time seems to have stood still in the Hall of Knights. This is where Axel Oxenstierna received his visitors and held his meetings. 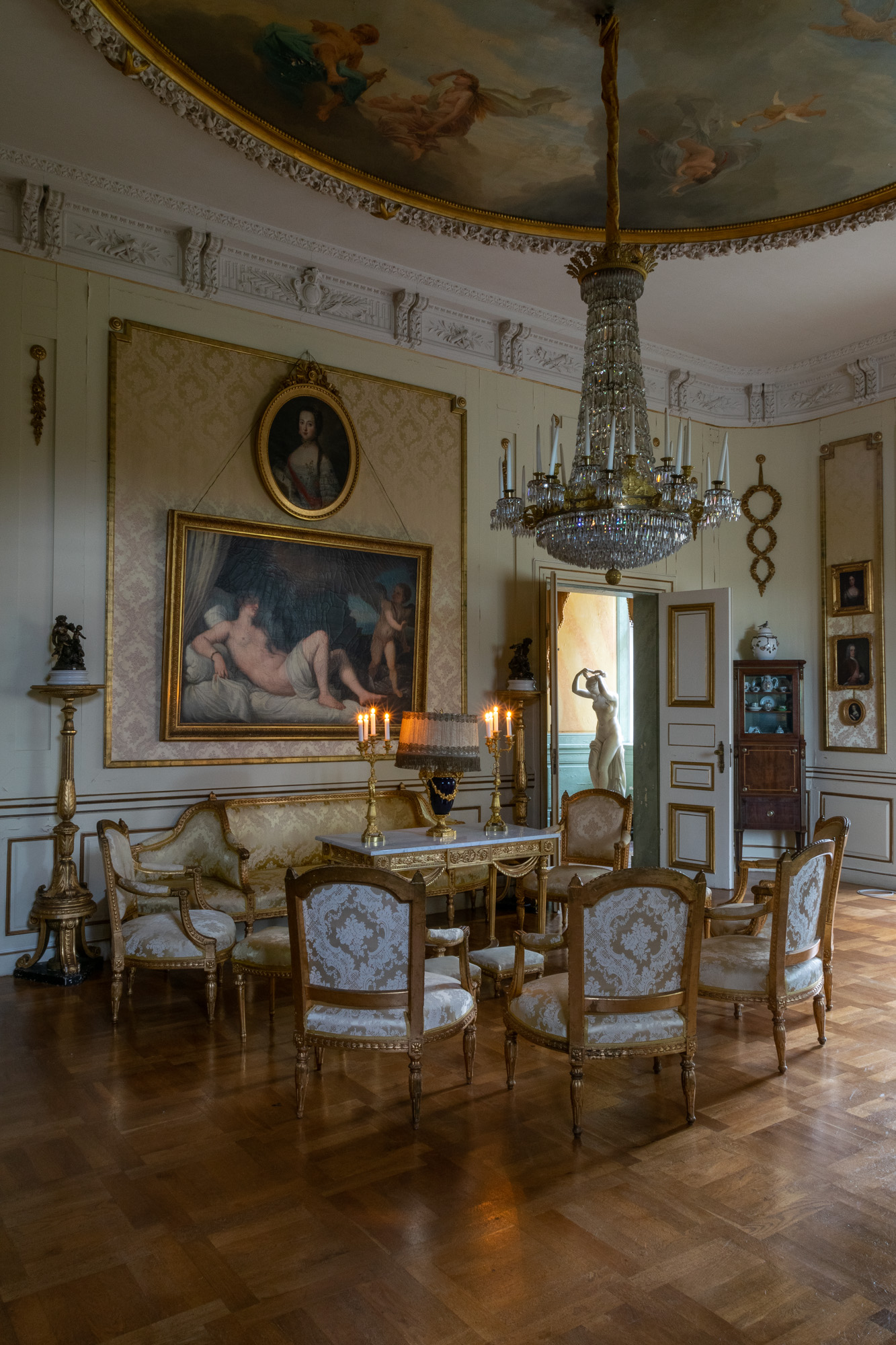 The Gustavian Yellow Saloon is the first room in the 18th Century furnished main floor. Below is the gallery with stucco ceiling from the time of Carl Gustaf Oxenstierna, Baroque chandeliers and a painted ceiling by Ehrenstrahl. 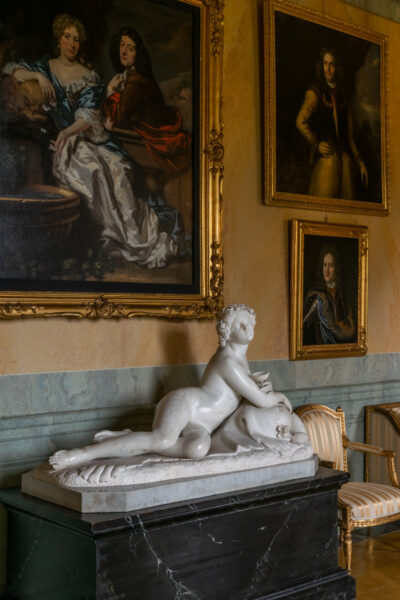 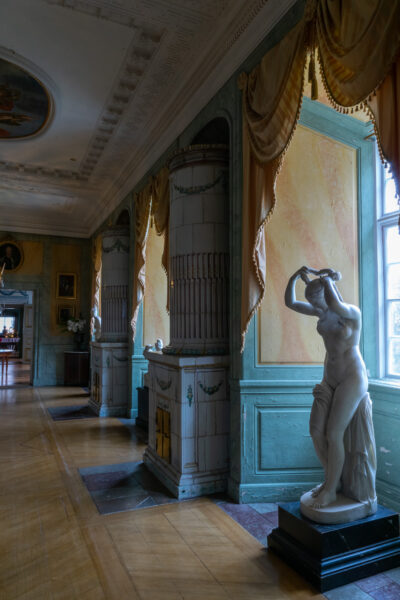 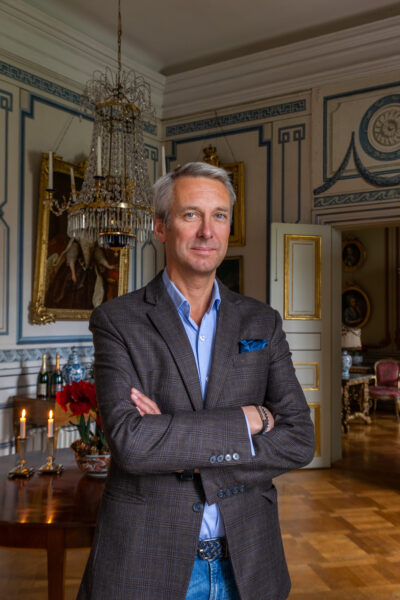 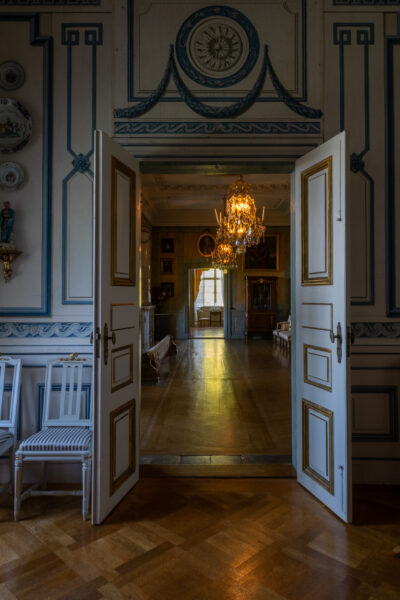 David von Schinkel in the blue dining room which is the middle room of the main floor with an enfilade of six rooms. The rooms have been renovated at different times giving them individual characters. 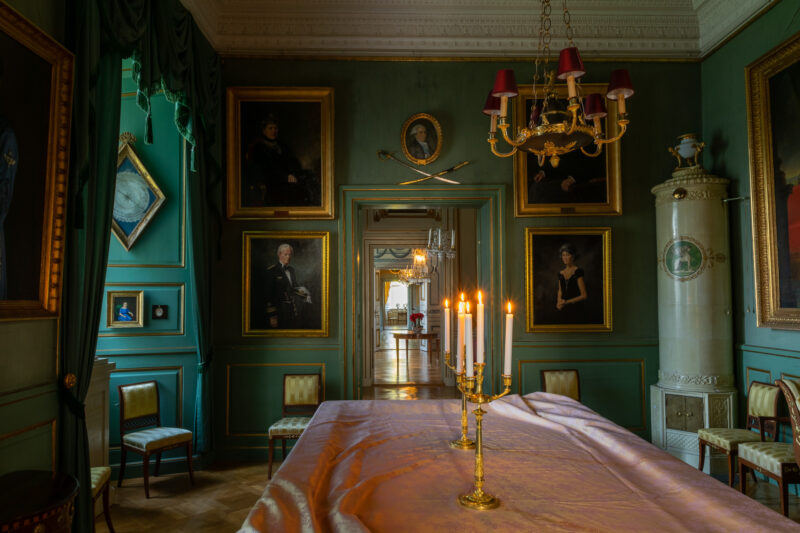 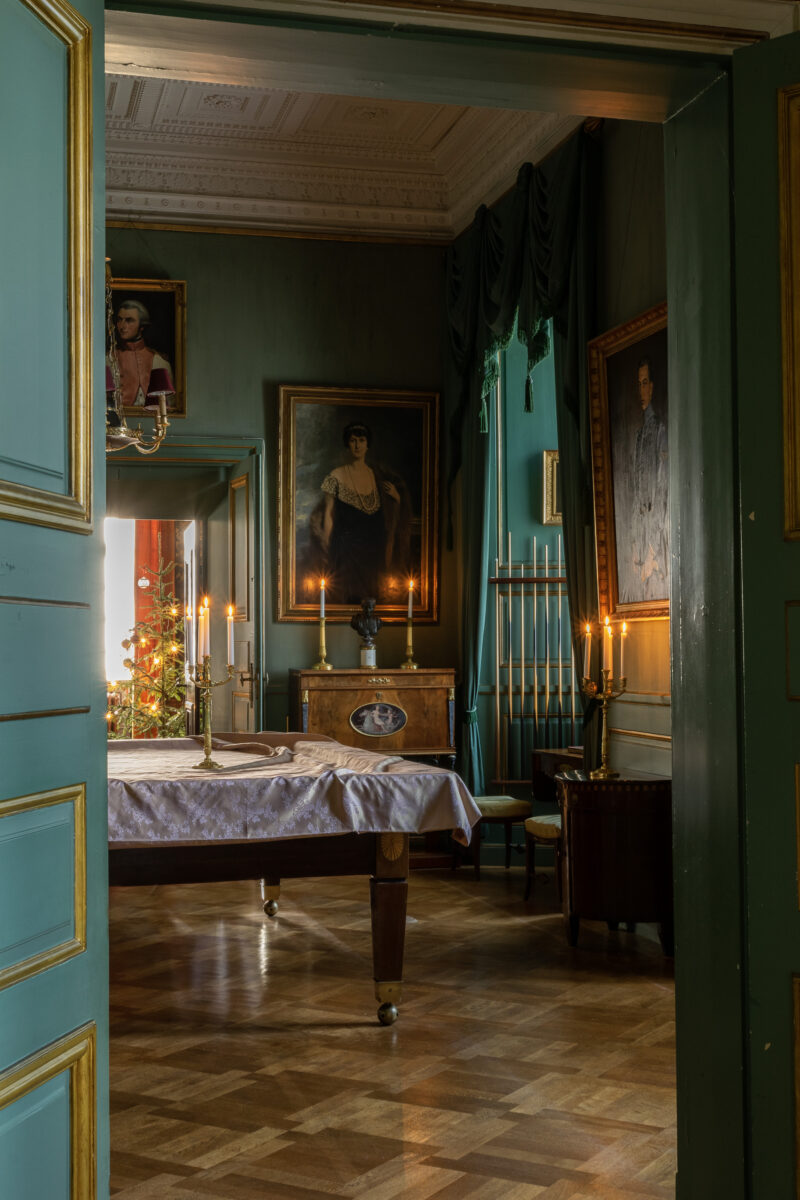 Billiard tables have their charm (this however is a Carambole table) but the green tabletop is a bit too sharp on camera. I found a beautiful piece of fabric in a Dining Room drawer which solved the issue. The Empire decorated room also presents portraits of the von Schinkel family. 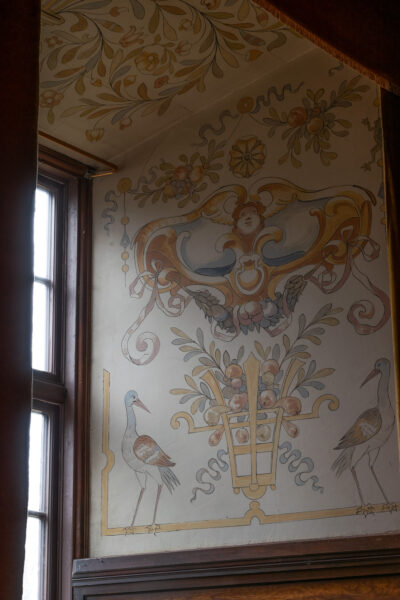 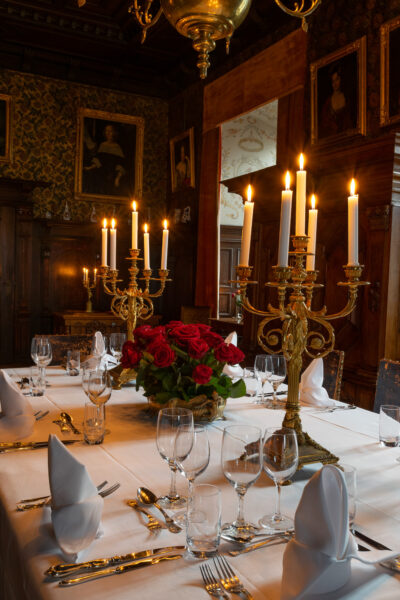 The Dining Room table is set for tonight’s guests. The room is a splendid example of Neo-Renaissance with dark wooden panels and wallpaper imitating gilt leather. The paintings in the deep window niches are from the 1600s and were restored by David’s mother Catharina von Schinkel. 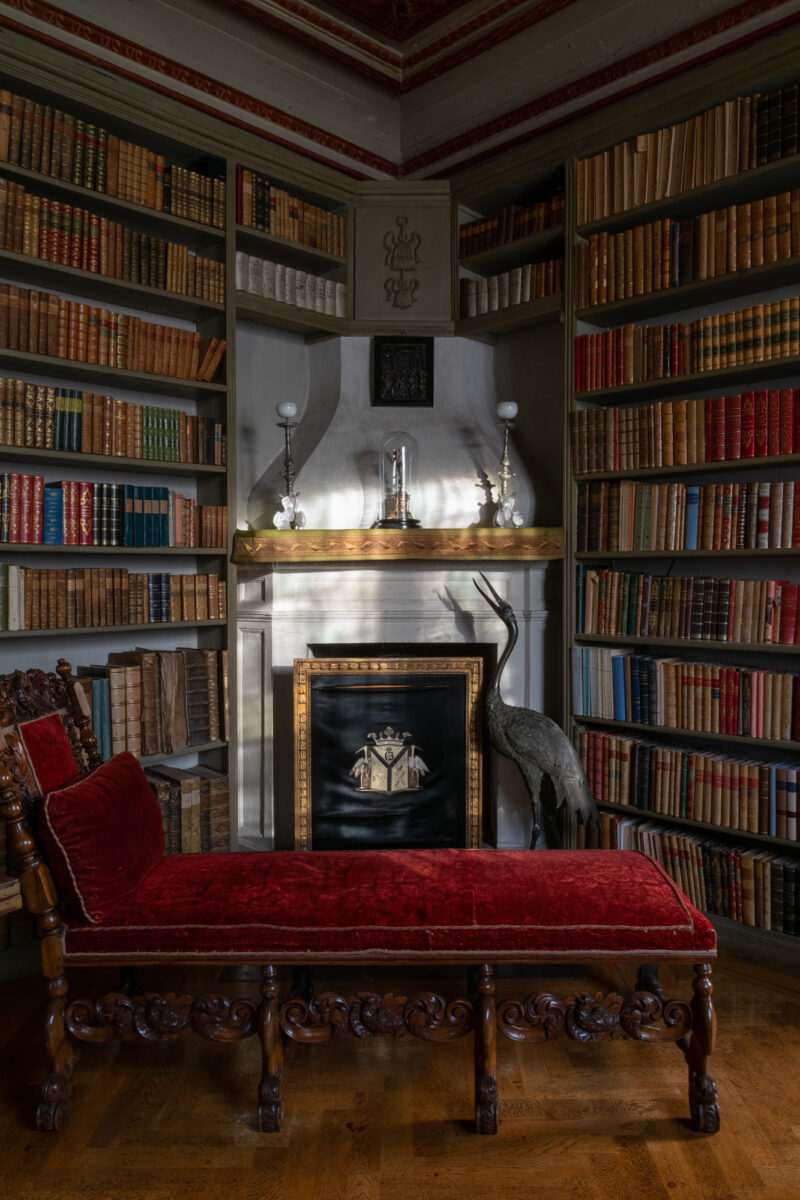 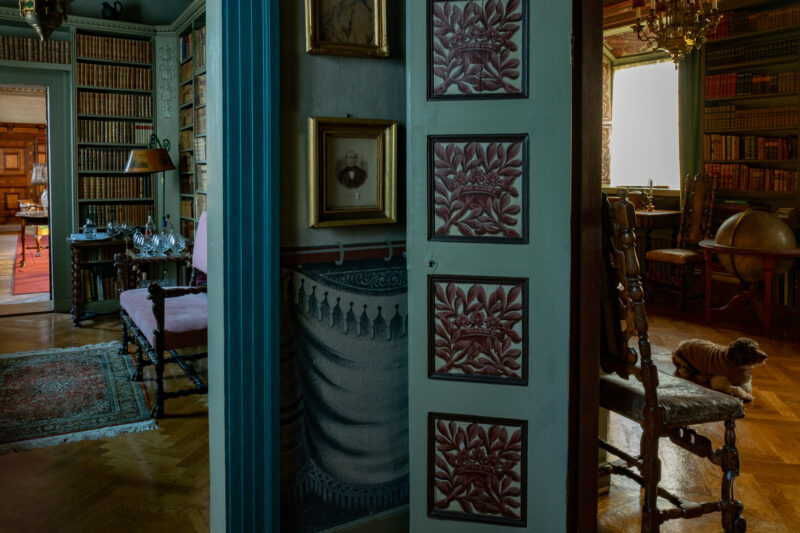 The Castle Library is laid out over three rooms and with original wall paintings while the shelfs were added during the 1800s. 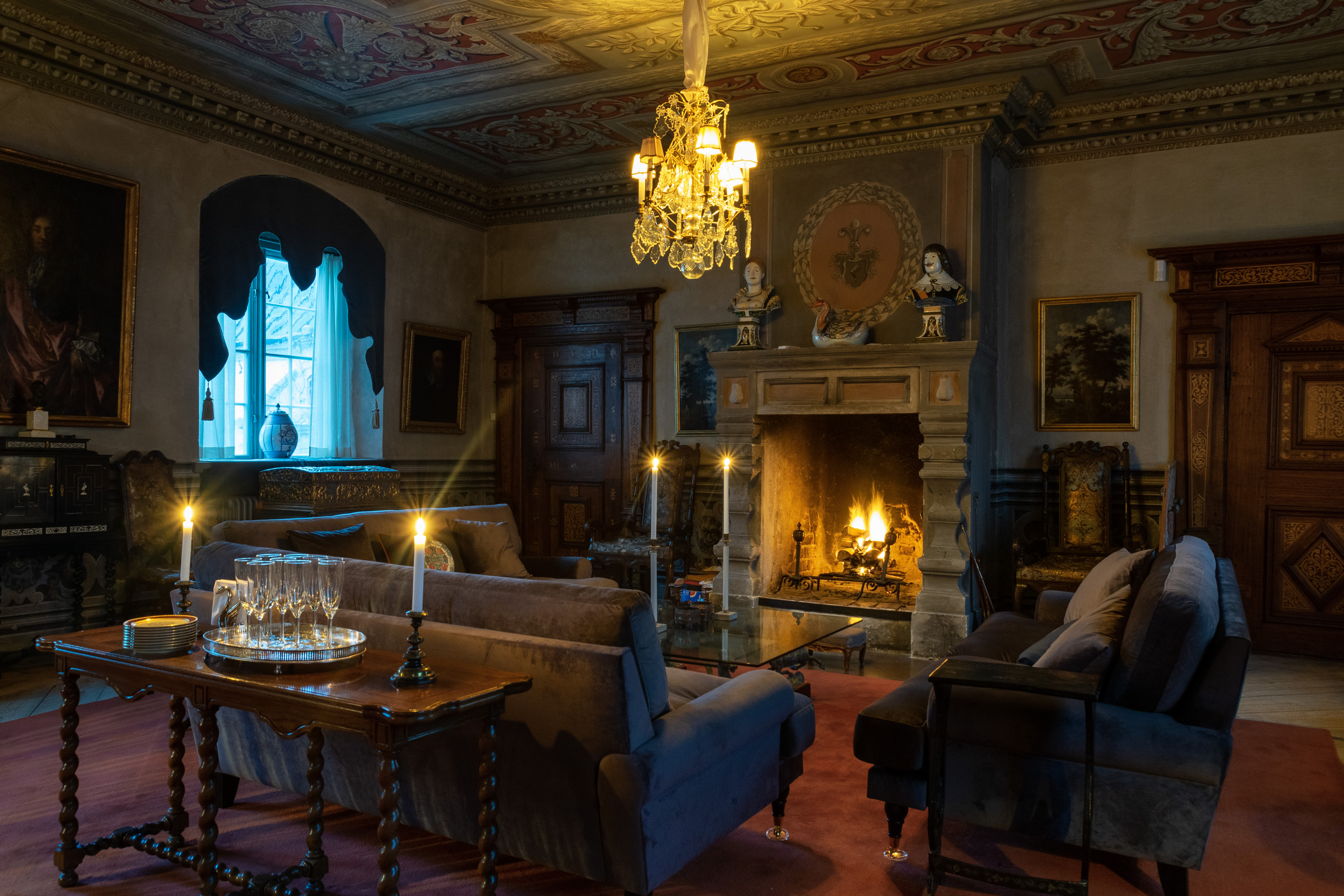 The cozy winter room with unique portraits and objects from the 1600s. 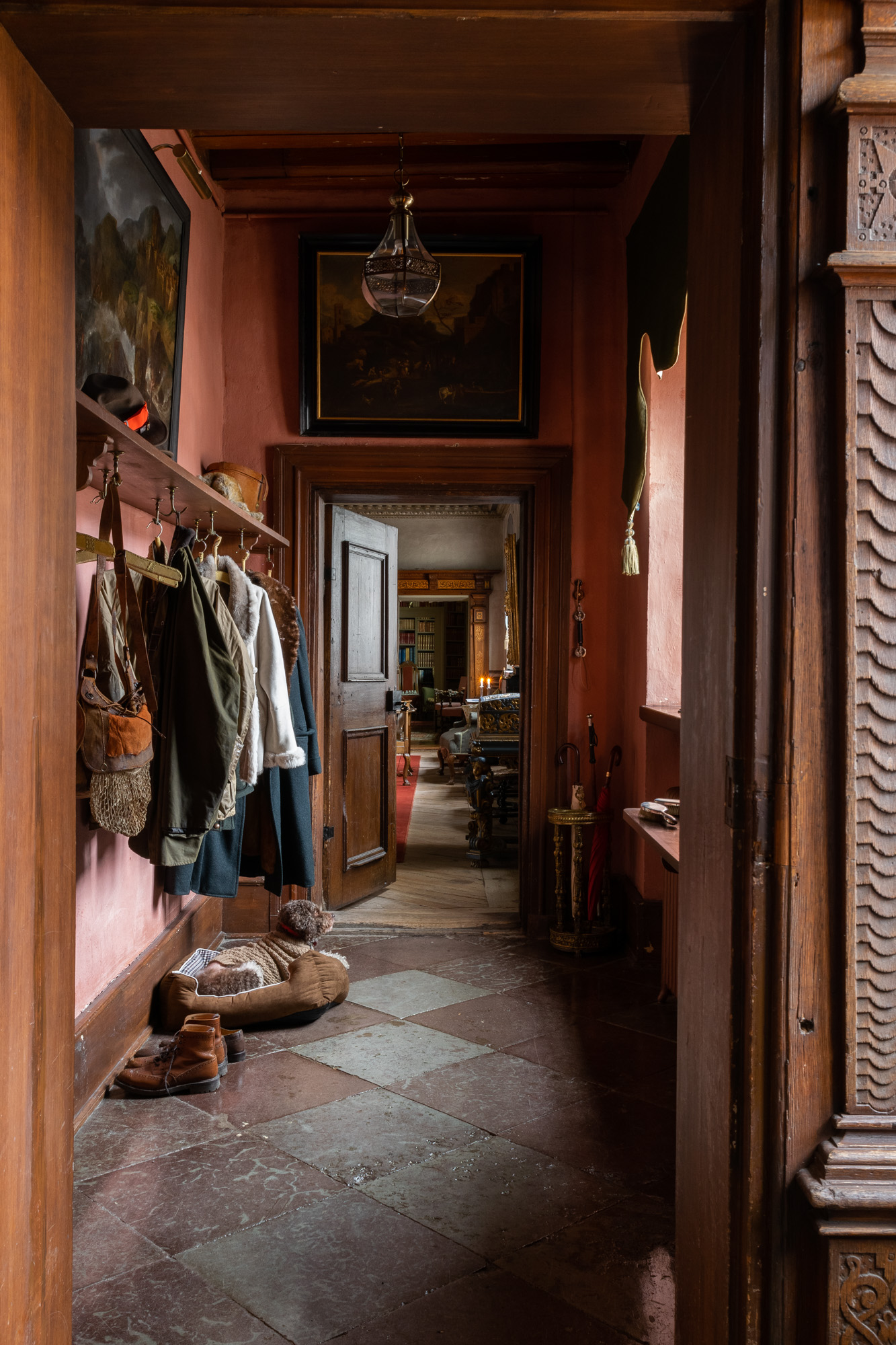 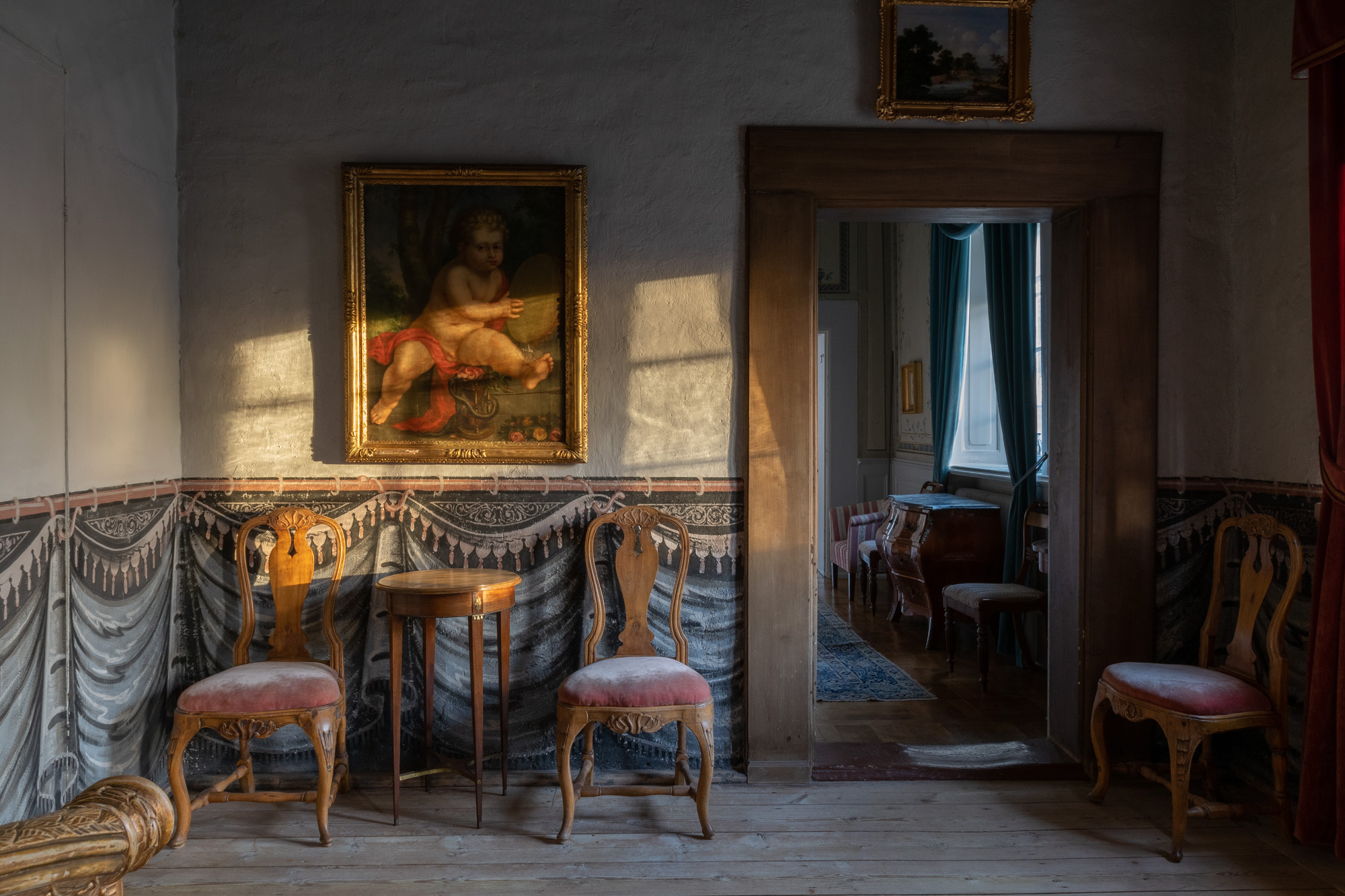 The bedroom that has had Greta Garbo as a guest. 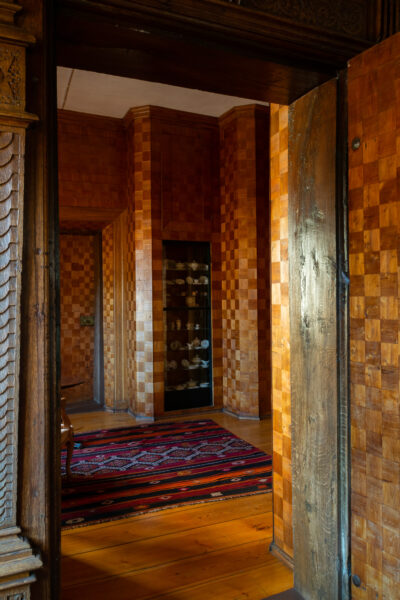 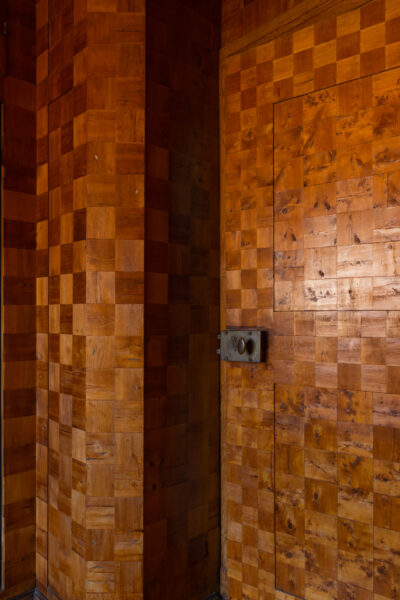 The Juniper room has walls clad in small quadrates of juniper root. The room ends the third corridor of bedrooms. From the room there is a staircase that leads through a jib door in the Hall of Knights. 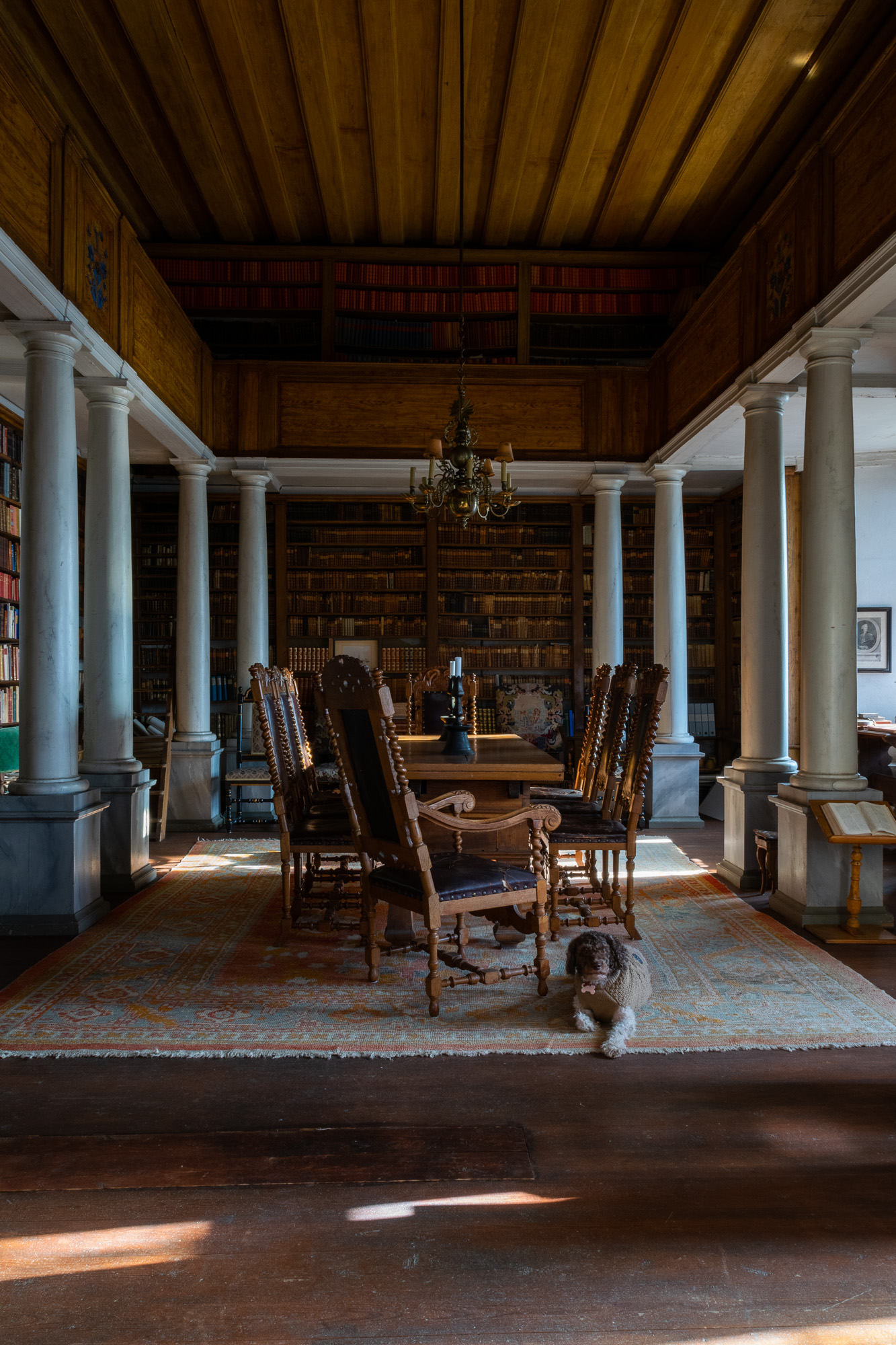 Elsa in the top floor’s archive. It was chilly so we gladly sported our jumpers. 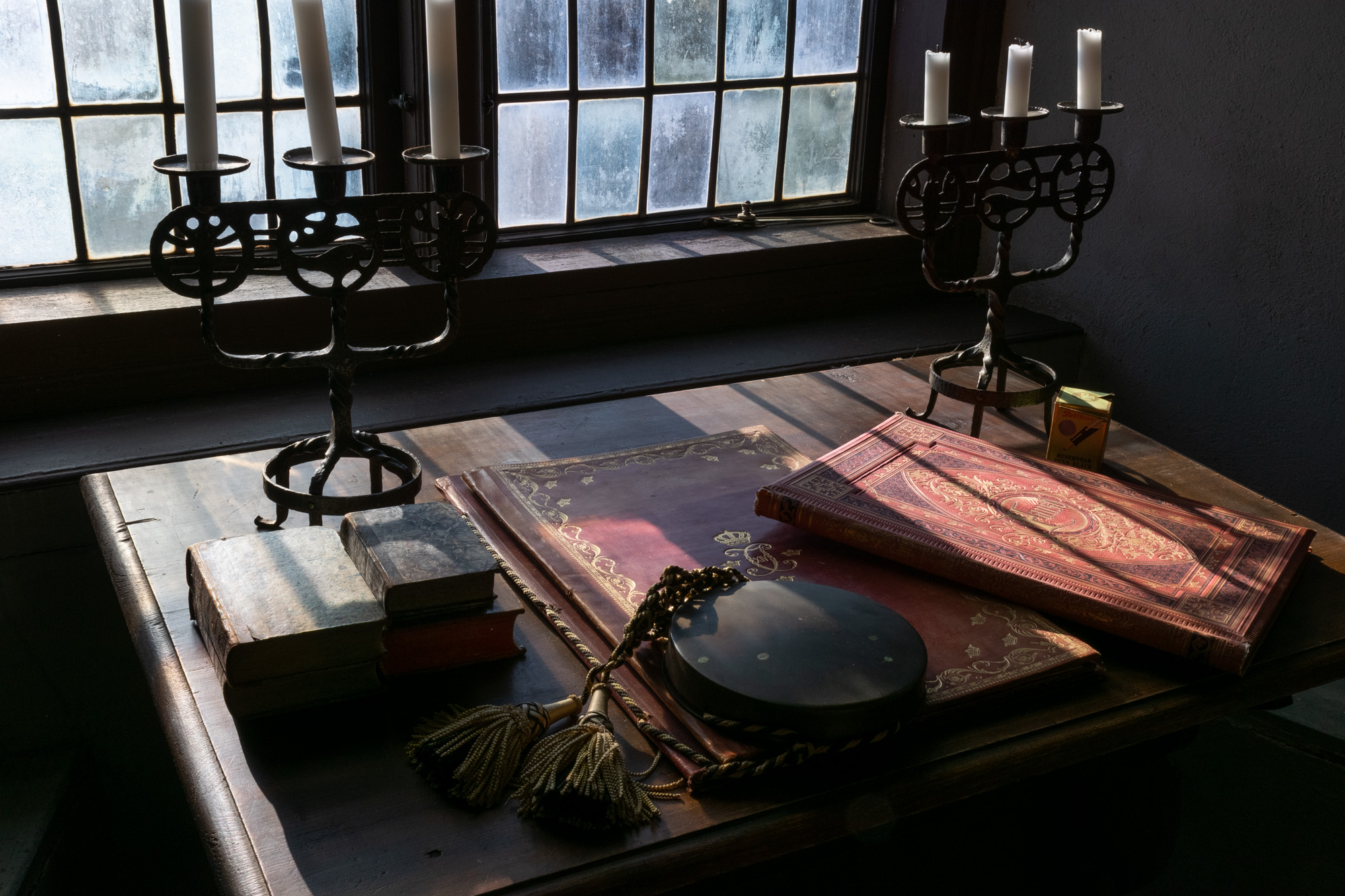 On the desk in the Archive Room there are old documents on the desk, one carrying the seal of Charles XIV John. 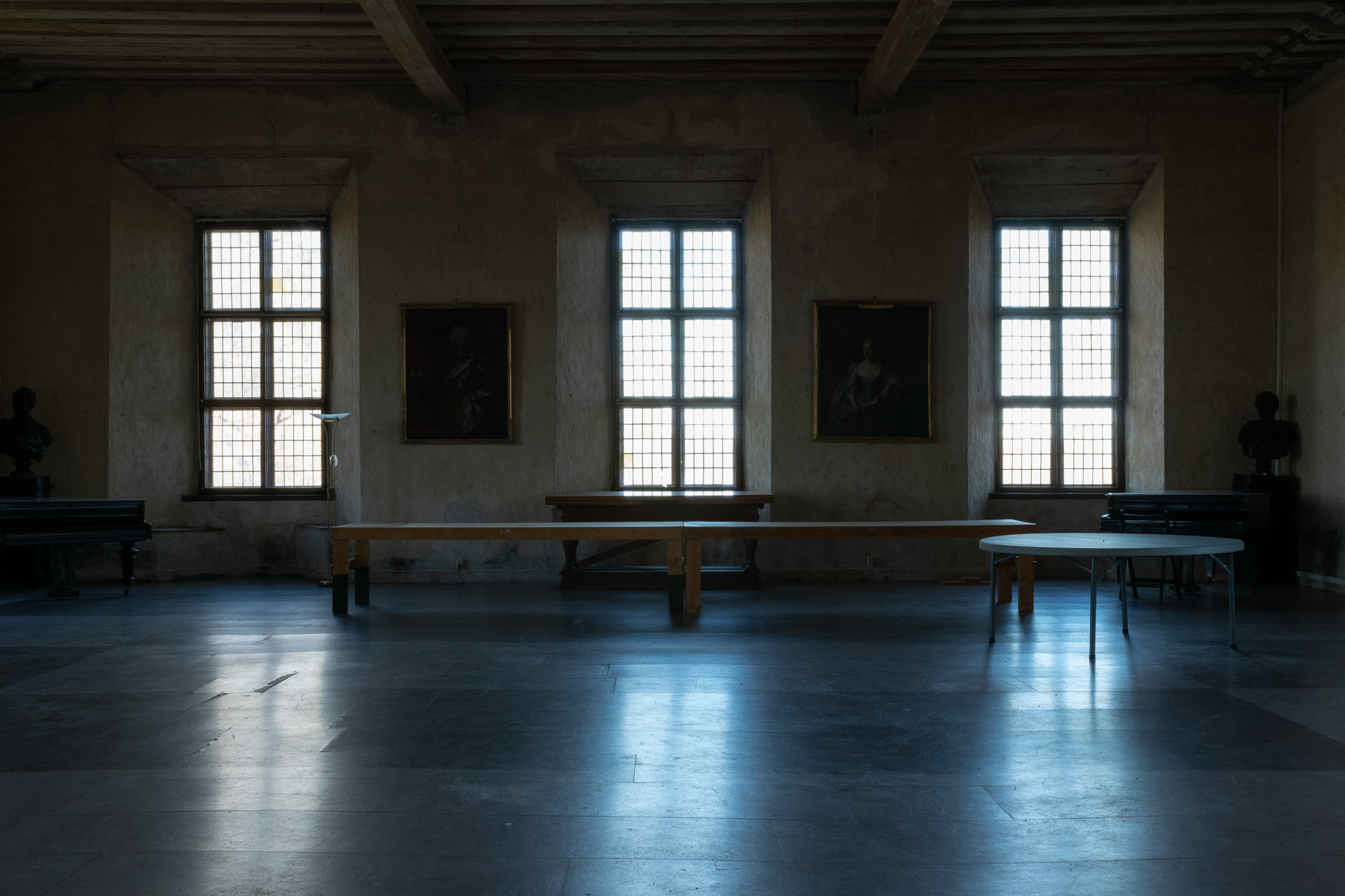 The upper floor presents an enormous 290 sq.m. room with large windows in three directions and benches in the niches. The room is empty apart from a grand piano, a few busts and some portraits. It is unknown if the room initially was planned as a ballroom or perhaps a chapel, the leaded windows indicate the latter. The upper floor is rarely used but David is not short of dreams and plans for the future and wants to make sure that this side of Tidö will also come into its own. 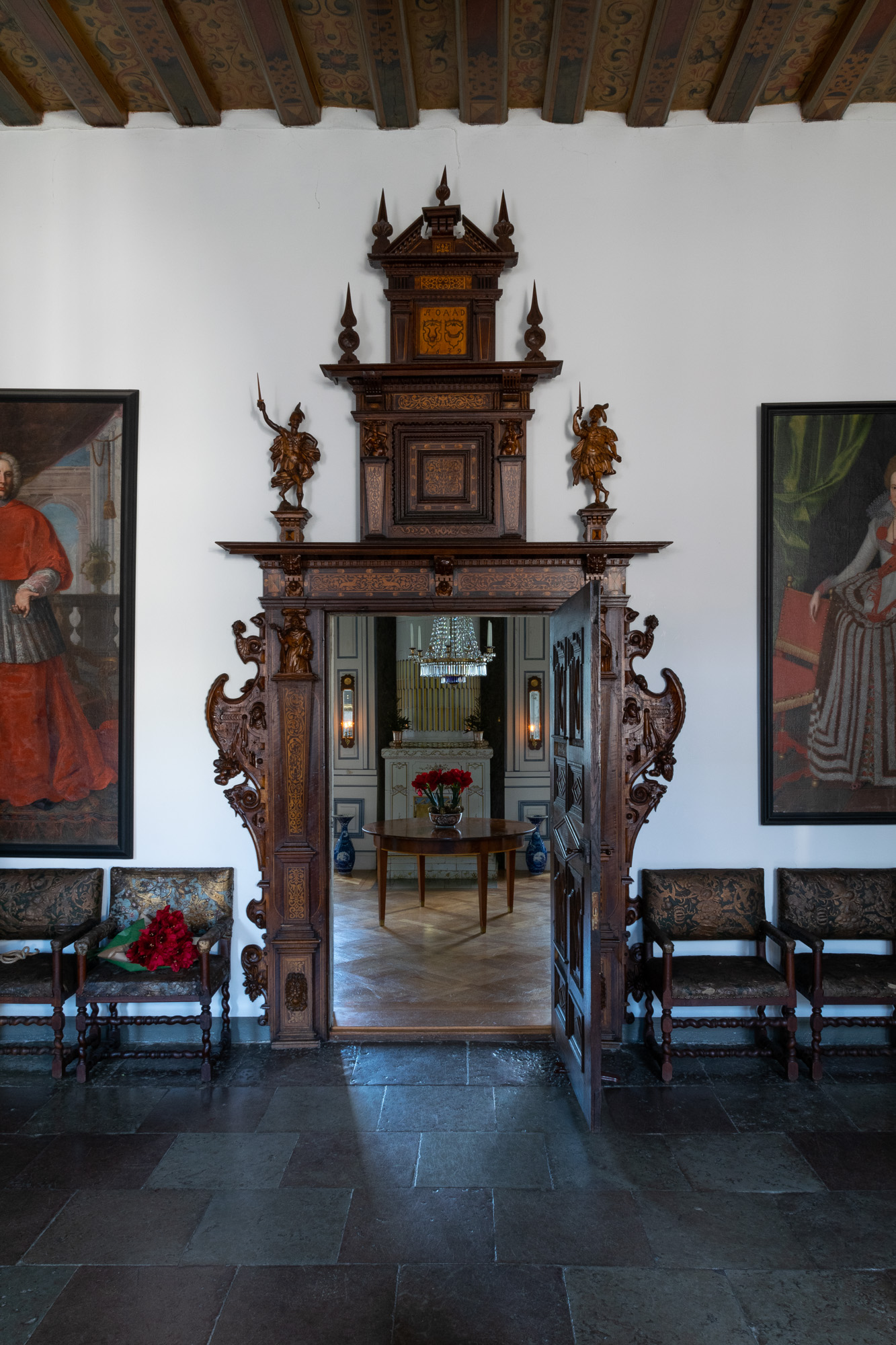 Back in the Hall, with Tidö’s most beautiful door in intarsia. Many thanks to the von Schinkel family and little Elsa. Also, Blomsterlandet in Eskilstina, was kind enough to lend me som Christmas fabric flowers.

The castle is open for viewings in the summer, read more on the website here. And if this was not enough, the old stone stable has been turned into Tidö MC Collection filled with motorcycles from the early 1900s until today. There is also a bike museum and tea & biscuits (fika) can be enjoyed in the Castle Inn! The unique toy collection has been moved to Bergrummet in Stockholm.